To buy at Books-A-Million

To buy at Barnes & Noble

To buy at Amazon

Comments by Jim during a recent interview with Publishers Weekly:

1.) How did American Wife come to you? Did Taya approach you? What were your initial thoughts on participating?

The seed for American Wife was planted before American Sniper even came out, before the world knew who Chris and Taya Kyle were. Chris and I talked about somehow convincing Taya to do a book on her own about life with a Navy SEAL, kind of a “The Care and Feeding of a Navy SEAL.” Time passed quickly and we never got a chance to do that.

Taya had been an important part of American Sniper, and we worked together after Chris died, first to finish American Gun and then to pull the Memorial Edition of Sniper together. She also started giving some inspirational speeches, which I gave her a few notes on. It was during that time that she started pulling together a plan for the Chris Kyle Frog Foundation.

Somewhere in the middle of all that, we started talking about writing a book together, talking about her experiences and the difficult process of grieving and carrying on. She initially wanted to talk about other people she had met with Chris and afterwards, but it became clear that her story would give the work more focus. I think she came to understand that she can inspire others, and the book would tie into the work she was doing with the foundation and the talks she was giving.

My only concern was the emotional toll it would take on her. I still worry about that.


2.) What was the writing process like? How did the two of you work together?

We basically talked for hours just about every day for months, usually over the phone though occasionally in person and via email and text. We would talk about what she’d been through, everything from day to day routines to raw emotions. We skipped around a lot, but basically we covered every aspect of her life, with Chris and before and after.

Ordinarily I do the bulk of my research in person, but I think we knew each other so well by this point that it was just as easy and effective over the phone. That also gave us flexibility schedule-wise. Ironically, when we were in the same place – a speech or some other event – there were generally so many other things going on that we couldn’t get much work done on the book, even though we would set aside time for it.

There were and still are huge demands on Taya’s time – the murder trial and the foundation to name only two – but her number one priority was always her kids, as it should be.

Once I had the bulk of the story, I wrote a draft. She came back with some notes and we polished it up from there. We had a lot of back and forth through0ut, trying out ideas, etc.


3.) Did you learn anything in cowriting this new book that shed light on American Sniper for you?

Taya had been such an integral part of American Sniper that this book really just felt like an extension of that. Of course, I was there for some of what we write about. But what has always amazed me was the depth of love that Chris and Taya felt toward each other, and how they both fought so hard to keep that love alive. I still remember the first time they talked with me about their marriage, tears rolling down their eyes. And I remember watching them walk out of the airport the first time they landed in New York, before they spotted me – you could see the unconscious understanding between them, comfort and assurance in each stride.


4.) Did the increased visibility (due to the movie) of Chris Kyle’s life story play into the writing on this book at all?


The book was written before the movie was released; we added the information about the Academy Awards, etc., in galleys. I will confess that I was nervous that Taya might not like the movie – I knew it was going to be great, I knew the lengths that everyone, from Jason to Clint to Bradley had gone to get it right, and I was sure it would be great, but . . .

Fortunately it was everything Taya hoped for.

It’s worth mentioning that as soon as it was published, American Sniper gave Chris a pretty high-profile, and we discuss that and some of its effects in American Wife.

I think the fact that I had known them, worked with them so closely, and our families become friends added a certain comfort level for Taya. The fact that I’d been there for a lot of the story probably helped, though it also made it more difficult for me emotionally.


6.) How did this experience differ from your other writerly endeavors, including American Sniper?

I don’t believe I’ve cried while working on a book before.

I feel incredibly privileged not only to have helped Chris and Taya tell their story, but also to have witnessed their attempts to put their deeply held principles about helping people into practice. I greatly admire Taya for her strength, perseverance, and sheer will power as she has dealt with impossible grief and managed not only to carry on but really triumph over this horrible tragedy. She’s had a great deal of help from family and friends, but in the end it has been her vision and love that has carried her through. 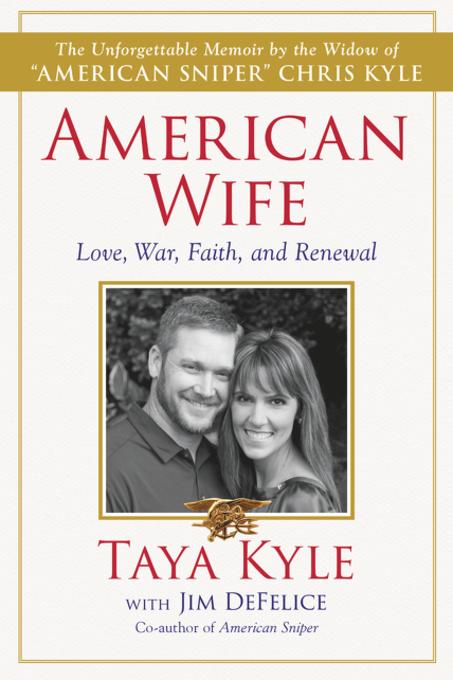